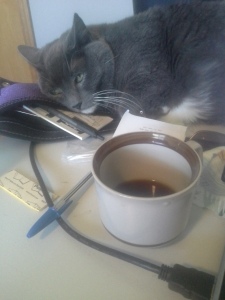 There’s a meme that’s been on Facebook recently that claims writing is 7% inspiration and 93% staying off of the Internet.

In the case of this blog, I apparently have been gone too long from this particular portal of the Internet, so for that I apologize.  I have the usual bucket ‘o great excuses, but excuses are typically a lot of hot air, so I will spare you the details. However – my time away has been well spent, so let me do a little bit of catch up:

May 2015 – I kinda, sort of hit my internal deadline for the final revision of After Life (AL) and was able to get the manuscript to my friend Jeff by May 15th.  So where does the “kinda, sort of” come into play?  He didn’t get the last three chapters until July 18th.

June 2015 – I made a friend, slept a few nights in a B&B run by monks, and met fellow members of the Mystery Writers of America – Midwest Chapter in Chicago!  The occasion was the Printers Row Literary Festival and because I wanted to do some networking this year, I hopped a plane and soaked in some adventure.

July 2015 – My family moved to a new house!  We’re still in the same town we were in before, but acquired newer digs with a huge backyard for our little hooligans.  I also turned 37, fully finished my first novel and sent it to three beta readers, and I submitted a short story for consideration in a local mystery anthology.  I’ll find out in October whether it’s been accepted or not.

August 2015 – My month has started out with a literary bang, having attended the book signing of my dear friend and mentor, Jerry.  (He’s also one of my beta readers.)  I’ve also sketched out a couple of goals for this month – serving as a beta reader for my friend Emily is one of them.  I also need to “organize” my own writing life and make some progress during my downtime while I await feedback from my beta readers.  I’m hoping that includes some outlining on one of my “shelved” fiction projects and catching up with some reading.  Oh … and unpacking.  Always the unpacking.

I’m hoping this finds you all well and reading!