I’m a child of the 1980s.  One of those kids who grew up in the middle of nowhere, but had enough TV signal to watch the World Wrestling Federation (WWF before it was the WWE) when I was growing up.  And dare I say, not only did I watch wrestling (my whole family did – it was our thing), but I enjoyed it.  I loved Brutus the Barber Beefcake (erm, had a poster), Rowdy Roddy Piper, Andre the Giant.  I remember watching a certain future Minnesota governor in the ring.

Recently, I had the opportunity to attend NerdinOut Con 2 and one of the featured guests was none other than pro wrestler Jake “The Snake” Roberts.  Roberts was one of the bad boys of the WWF and his schtick involved a 10-foot python named Damian and a move called the DDT.  He also happens to be my brother’s favorite wrestler.

On the morning of the con, my mind supplied a random memory.  I *too* liked Jake “The Snake” Roberts.  To the extent that I stole my brother’s collectors card of Roberts back when we were kids.  And some 30 years later, not only did I remember my childhood petty misdemeanor, but I knew EXACTLY where I had hidden it.  So, the picture below: top left is me explaining to Roberts how I stole my brother’s card (I LOVE that my dad shot this picture as Roberts is looking at the card and probably wondering why the hell he attends cons); top right – the signed card; bottom left is the back of the card; bottom right – my brother and his childhood hero. 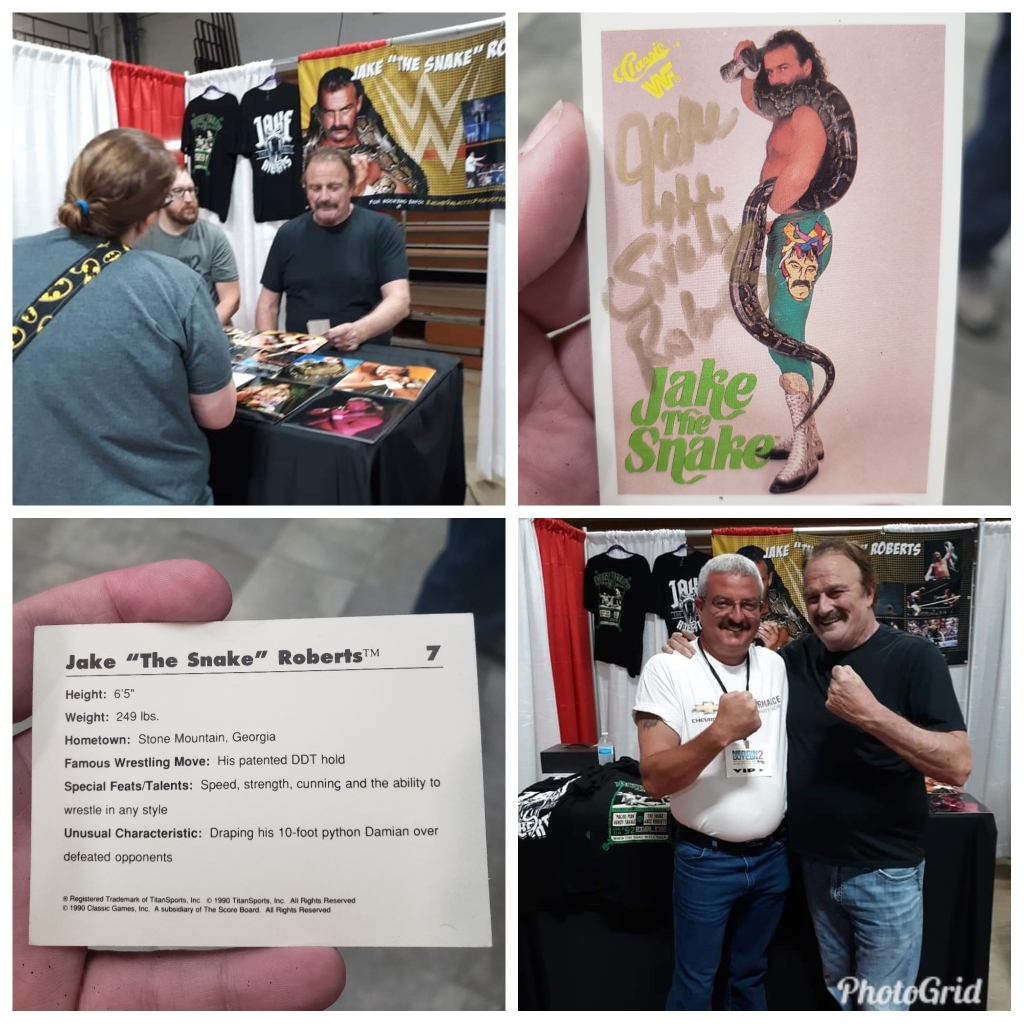 Spoiler alert: My brother got his card back.  And I had a great day hanging out with my dad and my brother at the con.  Both of them were out of their element.  (I think that Saturday was the first time they had ever heard the word “cosplay” let alone actually witnessed what cosplay is.)  We drank a lot of beer, but it was a lot of fun.

I also got to be the eccentric aunt to my beloved nephew Joe.  (We’re both the youngest children of our families and we love coffee and food.  He’s a great kid.)  It was a great weekend.

So much of my childhood and my small-town upbringing informs my writing, so it’s always an experience to revisit the past and to step outside of my own element (and chat up retired pro wrestlers).

Listening: I’m grateful to live in a city with a vibrant and growing arts scene.  One of the standbys in the summer is Down by the Riverside, free Sunday night concerts in a downtown park.  (Full disclosure:  I’m on a board that advises Riverside Concerts, the City department that organizes and curates these concerts.)  This past week, Sleeping Jesus, a band from Winona, Minnesota, was the opening act and man … that’s music to write to!

Writing Life:  I have a girls weekend planned with some writer friends. Looking forward to gathering some writing inspo and filling the ‘ol well.