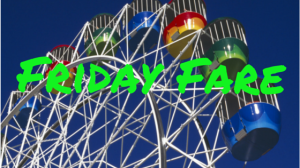 I’ve had a hell of a hard time adulting lately.  Not sure if it’s been the endless rain, still recovering from my weekend at the Writers’ Police Academy (WPA), or what’s going on, but I’m ready for fall.  I’m ready for jeans, my favorite hoodie, toasted graham lattes from Starbucks, etc.

Without further ado – the interwebs have been full of good stuff lately.  In no particular order:

I was a proud Kickstarter supporter of Jessica Lourey’s novel “The Catalain Book of Secrets.”  Ms. Lourey taught a class at the first writer’s convention I attended and I appreciated her insights.  Recently, she gave a TEDx Talk on using fiction to rewrite your life.  This video is about 13 minutes long and well worth a watch.  I was gobsmacked at the amount of grace that Jessie brought to her audience and blessed by the levity and humor she brought to her personal story.  Seriously – 13 minutes.  Coffee break.

Speaking of people named Jessica … my WPA roomie and sister-in-arms Jessica Ellis Laine wrote her Top 10 list for why she loved the 2016 WPA.  And crazy story … there’s a darkened picture at the end of the post.  There’s this lady who looks like me, but she’s dancing. Since I’m the boring-est person in the world, that’s likely my evil doppelganger.

Rick Astley talked to Rolling Stone about the benefits of “rickrolling.”  Seriously.  A) The man talked about rickrolling. B) He wasn’t a dick about his past as a 1980s heartthrob.  The interview revealed an amazingly gracious man who embraces his footnote in pop culture history.  It’s a good read.

I’m not saying that this is a contrast, but when it comes to people who are “uncomfortable” with the past, my favorite Monkee is famously prickly about his role in the US version of the Fab 4.  But … this article (also from Rolling Stone) talks to the three surviving members of The Monkees and goes through their musical history in 15 songs.  Considering that their catalog goes back 5o years (and includes songs from Neil Diamond, Carole King, and Harry Nilsson) it’s not a bad look back.

Listening to: Recently discovered Lord Huron.  There is some good stuff to be heard here.

Reading:  I’m currently trying to read an overdue copy of Sarah Fine’s “Fractured.”  (YA novel, second in a series, the first was very good but I’m having attention span issues [see intro note about “adulting.”].)  I finished reading a draft copy of Jerry Johnson‘s upcoming novel.  (And that. was. GOOOOOOD.  Should be out in October.)

Fiction Update:  Shhhhh … shh … shh!  After Life (AL) is currently resting and getting ready for the next round of edits.  More about that in an upcoming blog.  The next round of edits will commence on October 1st!  In the meantime, I have a lot of books I want to catch up on.  Some involve craft, some are just good fiction.  All good stuff for the brain!

Sorry for being MIA last week.  Work has been a little crazy lately and I was in the process of getting ready to go on a west central Minnesota roadtrip.

Here’s what’s good on the Internet:

Kris Kristofferson.  This piece by the Rolling Stone was a great read.

I read this article from Outside Online about Kay Grayson, known as “the Bear Lady.”  What I liked about this piece was the deep dive the journalist made into this woman’s life and the sense that I couldn’t put this article down when I started reading it.  A very compelling piece of work.

Another piece that came out in April from MPR News.  A goofy read.

Listening to: I got a chance to take a deep listen to the new Monkees disc while I was on my roadtrip last weekend.  And it was really good.  Most of the album is posted on YouTube and it’s a solid listen.  (In no particular order, my favorite tracks are “Me & Magdalena,” “Birth of an Accidental Hipster,” and the title track “Good Times.”)

Reading: Yeeeeeah … I kinda burned through of almost all of Lincoln Child and Douglas Preston’s “Pendergast” novels.  (There are 15, and the latest one has a 16-deep wait list at the library, so it’s probably good for my eyes that I can’t access the last one just now.)  And honestly, I learned a lot about pacing from the “Pendergast” books, so I think I’m going to back up and read them again.  I also finished Dana Chamblee Carpenter’s “Bohemian Gospel,” a historical mystery that I similarly couldn’t put down.  I wasn’t 100% thrilled with the ending, but it was the ending that belonged to the story.  I have a sense that this one is going to stay with me for awhile, the story was haunting and the details were just sumptuous.

Fiction Update: One of the best parts about being away for the last weekend was the opportunity to get some uninterrupted time working on “AL.”  I didn’t get as far as I wanted, but considering I was in the town that originally inspired the setting for my book, I had a wonderful weekend of soaking in some of the details that I look forward to bringing to life in my story.

Eeesh – after the last Friday Fare’s whiny lament, I’m glad you’re back.  I promise I’ve been reading good things and that I’m more productive than I was the last time we met.

I don’t know if it’s surprising, per se, that I’m posting this article about Sylvester Stallone, but if you know me, you’d probably not mistake me for a rabid “Rocky” fan.  Because I’m not.  But … one of my all-time favorite movies is “Cop Land” so I’m always happy to see Mr. Stallone get the respect that he’s due.

I’m not going to lie – the idea that The (surviving / non-estranged) Monkees are getting together for a 50th anniversary and are releasing a new album brings me much joy.  I may try to be all cool and relevant with the music that I listen to (ha!), but at heart I’m just an 11-year-old girl listening to my Monkees cassettes in my cluttered farmhouse bedroom, mooning over Davy Jones some 20 years after his heyday.  (I’ve said it before … I’m usually behind on trends.)

This weekend is Valentine’s Day.  I foresee heart-shaped pancakes and heart-shaped pizza in my future.  And maybe this cake.  Because … cake!

Listening to: I’ve been listening to the YouTube again.  This concert is one of my favorites and always helps me get a lot of work done in my day job.  And I’m not going to lie, Gordon Lightfoot in 1972 makes me wish that time travel was reality so I could have seen Mr. Lightfoot in concert in the 70s.

Reading: Honestly, I haven’t read much lately.  It’s busy in the proposal world right now, which is a good thing, but doesn’t give much time for more than work and family time.  I don’t achieve a lot of balance during these busy seasons.

Fiction Update: I’ve been working on a short story for consideration in an upcoming anthology and although it’s been taking me a long time to get it to coalesce, I’m excited about the direction that it’s going in and I think that I’m going to have a decent story at the end of this process.  Even if it doesn’t find a home in the anthology, I think it’s one I can shop around elsewhere.

I also met with my Twin Cities writers group earlier this week.  I didn’t have anything to share (see comment above, re: achieving balance) but I’m liking the energy that I’m getting from the group and think I’ve found a good group of folks to exchange stories with.

Wherever my readers are, I hope you are well and happy.  Happy Friday!  We made it through another week!