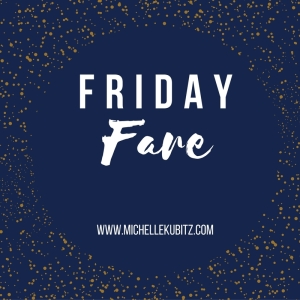 Is it my imagination or did 2018 sneak up on us like some stealth ninja?  I have a post-it note on my desk that I wrote in November with my year-end wrap-up ideas and … it’s still there.  But I’m just getting around to writing this post.  I get props for the effort, right?  Right?

Well, without any more of my lame excuses, I need to start out by saying that 2017 was a pretty damn incredible year.

#2017bestnine A lot of personal triumphs in what was a troubling year around the world. Hoping for a peaceful and productive 2018.

I broadened some horizons.  I met some incredible people.  I was gobsmacked to win an award for my novel “Dragonfly Lake.”  I attended a book signing … where I signed books!  I think I had about a million “pinch me” moments throughout the year that defied my expectations.  Here’s a bit of a recap:

In January, I announced that the Sh*tty First Draft

(SFD) of Dragonfly was done (finished in December 2016.)  Guess what … still editing that SFD.

February – Attended the Minnesota Writers Workshop and pitched to two agents.  It was nerve wracking, but helped me to polish my pitch.  Money well spent.

I spent March working on a short story.  And my children seemed to be sick for most of the month.  (Note to children … please do not schedule a repeat.)

In April I moderated my first panel that featured some kick-ass Minnesota mystery writers that I admire immensely. I also started (and apparently I subsequently abandoned) a feature that I called “Book Dump” that featured AAAAALLLLLL of the screenshots of books that have caught my fancy on social media.  The sad part?  I could revive this feature in a heartbeat, because I screenshot books “To Be Read” (TBR) on a daily basis

May … the only thing of note in this month is that I changed the Friday Fare logo to reflect what my children call “dandi-flowers.”  Man, I miss spring.

What I lacked in May, I made up for in June.  I read “Jane Steele” by Lyndsey Faye and have subsequently nursed a girl crush on both Jane and Faye since then.  Lori Rader-Day and Kristi Belcamino kicked some arse at Subtext Books in St. Paul.  The night before that, I got to worship at the Church of Neil Diamond and I even made time during June to take a class at the Loft Literary Center from Tamara Hogan.

Worshipping at the church of @neildiamond. #latergram #concert #stpaul #brotherlove

Aaaaaaaaaaaand then I didn’t post anything in July, which … shame on me.  Two important things happened though in July.  OK – a few

things happened in July.  I turned 39.  (<– I love birthdays, because … well, cake.)  I got to see the final cover proof of “Cooked To Death II: Lying on a Plate.”  (I’d announce my involvement in the anthology later, but trust me – there were squeals of joy when I saw the back cover.  Especially when I saw a blurb from William Kent Krueger.)

Another crazy thing happened – I got an email from Nashville, informing me that my unpublished novel “Dragonfly Lake” (why yes, the novel of the SFD) was nominated for the 2017 Claymore Award: 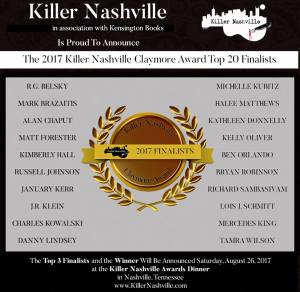 I may have shrieked a little bit.  May have run around my basement a couple times like a total loon.

AUGUST. There was a lot of August and only one of me.  And that particular me drove 1,500+ miles at the tail end of the month to Nashville, Tennessee and back.  I got to cross rivers and see landmarks that I had only read about in books and heard in old country songs.  And I found out that I’m really, really, really bad at speaking in public when I’m caught unprepared:

I also made some lifelong friends and tribe members.  So. Amazingly. Blessed.

September.  Finally wrote a recap about my Killer Nashville weekend.

October. Finally lifted the lid on my story’s inclusion in CTD.  Was surprised and thrilled that my parents drove 3+ hours to come to CTD’s first book event.

I knew today was going to be a pretty great day. Got to hang out with a bunch of amazing writers and sign copies of the mystery anthology I have a story in. Got to see some wonderful friends who came out to support me. But I had no clue that my parents made the 3+ hour trek to see my first reading. So lucky. ♡

November. Got to spend a girls weekend with two of my favorite writers.

December.  My blog presence was the equivalent of a lump of coal, apparently. 🙂

Man alive … sorry for the longest blog update ever, but considering I personally know the majority of my blog readers – I gotta extend my sincere thanks and my appreciation for being on this journey with me.  I hope that we all have a peaceful and productive 2018.